A memory:  I’m 9 years old and by now I’ve spent years dreaming of being able to sail a boat (I blame reading Swallows and Amazons), so my mum has sent me on a course.  We’ll be sleeping in bunks on a ship that is moored by the side of a harbour.  The night before, I am so excited I barely sleep.  Finally, the morning arrives, and I haul an enormous suitcase onto the deck.  The other children all live locally and arrive with friends, but being from London, I don’t know anyone else who is interested in boats so I am alone.  I’m desperate to sleep on the top bunk, so I lay out my sleeping bag as soon as I arrive.  When the others get there, they don’t mind.  They all agree that they would be too scared to sleep on the top bunk.  “What if I fall out?”, they ask me.

That night, as we’re all getting into bed, there’s some creaking and a a clunk, and a screw falls out of the bedframe.  My room-mates are terrified.  What if the bed collapses?  I offer to go and find one of the adults to ask them about it.  “Wow, you’re so brave” the other girls all tell me.

With hindsight, there were some fundamental differences in our upbringings – and especially our schooling up until that point.  I was used to standing up for myself.  I went to a primary school where if you didn’t learn to push, you would be last.  If you didn’t learn to cuss, you would be ground down.  I was never a Rude Girl, but I made sure I carried out my share of “your mum” insults during arguments, and I never let anyone intimidate me.  When I was scared, I definitely never let it show.

With hindsight, my school was quite rough.  I remember watching Jordan grabbing the headteacher’s jacket and kicking him in the shins before vaulting over the school gate and running off down the road.  I remember seeing the girls trying to wind up Sellom, knowing that if he was violent one more time he’d be expelled; when he finally punched Rochelle in the nose, blood poured down her face.  I remember Jared and Nicholas ranking the girls in the class from fit to ugly, telling some they were too fat – telling me I looked anorexic.  I remember Rachel leaving suddenly – rumour was she’d stolen money off her mum and been chucked out the house.  I remember being smacked round the face by Kadisha in year 5 and by Howard in year 6.  I never let the shock of it show though – like most of my class I believed that showing emotion was weakness.

Most of us were hit or beaten by our parents if we did something wrong.  I was lucky my Dad only occasionally hit me used his hand – my classmates had everything from wooden spoons to belt buckles.  Sometimes they had the bruises to show for it.

The next day, we were pushed out into little sailing boats and taught how to use them.  While other children bickered and fought about who was better at sailing, I came with no prior experience.  I knew I was privileged to be there; I knew my parents had paid for it, even though they didn’t have much money, and that most of my classmates could only dream of such experiences.  I threw everything at it – and I loved it.  Best of all was the capsize practice, where we had to turn over a boat in the middle of the harbour, then use our bodies to try and lever it up again before hauling ourselves into the boat.

Nevertheless, I credit my early schooling with the development of certain aspects of my character.  Something about learning to grab hold of opportunities when they come and throw your whole self into them; learning not to give up when the going gets tough; understanding the extent of my privilege; learning to push myself forwards and be determined; learning when necessary to not give a shit; being determined to do things my own way and not simply submit to the status quo;

Learning walk out into the darkness despite my own fear. 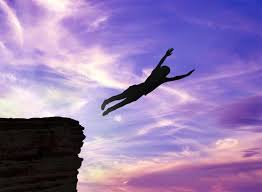